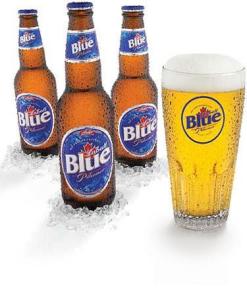 Okay, so, this sounds a bit goofy:  in a contest between Canada and Costa Rica, who wins?  Of course, it depends on what the competition is, but when it comes to each of those country’s best-selling beers, it seems the match is a toss up.

Earlier this week, Hop City Craft Beer & Wine, an excellent local beer and wine shop with a very knowledgable and helpful staff, devoted their weekly Wednesday night beer tasting to what they dubbed a good-natured “north vs. south” contest of beers, pitting Labatt Blue against Imperial.  I’ve had both beers before but had never considered how they stacked up against the other.  Turns out both are very similar.  Because I prefer somewhat heavier-bodied lagers, I had to give the edge to Imperial as it is slightly closer to a full-bodied lager.  However, the consensus of the other attendees at the Westside location of the trendy Octane coffee bar and lounge, site of this beer throwdown, happeared to be split, with as many people preferring the Canadian brew as those that favored the Costa Rican champ.  Well, glad that’s settled.