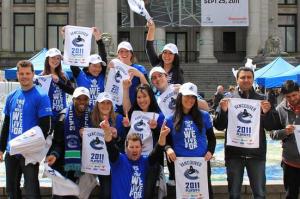 Interesting and very entertaining piece written by Jeff Klein in today’s New York Times about the ambivalent feeling shared by many Canadians — at least outside of British Columbia — regarding the Vancouver Canucks, which is the only Canadian team still in the playoffs for the Stanley Cup.  While Canadians would undoubtedly be proud to see a home team win the championship for the first time since 1983, the persistent regional / provincial rivalries and the roster of Vancouver team (being comprised of fewer actual Canadians than some U.S. teams),  leave many hockey fans uncertain.  Among the humorous observations noted in the article is this quote by Paul McDonagh of Dawson City, Yukon Territory:  “Of course, we’re supporting the Canucks.  It’s kind of a love-hate thing [many Canadians] have with Vancouver, like with Toronto.  Only with Toronto it’s mostly hate.”