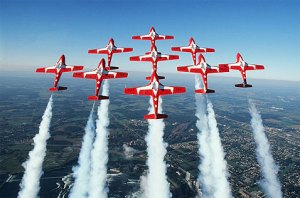 When most Americans think of snowbirds, what springs to  mind are Canadian travelers heading south to Florida for the winter.  Today, Atlantans will have an opportunity to see a different type of Canadian snowbird as the 431st Squadron of the Canadian Air Force, known as the Canadian Snowbirds, participates in the annual air show at nearby Dobbins Air Force Base.

For a time when I was a kid, my family lived in a small city with several military bases.  Occasionally, we attended air shows at which the Navy’s precision flying squadron, the Blue Angels, would perform (they will also be at the show this weekend).  Definitely awe-inspiring stuff — watching huge flying machines maneuvered in formation at incredible speeds.

The 431st Squadron of the Snowbirds dates back to World War II and they have been performing flight exhibitions since at least the 1960s as goodwill ambassadors for both Canada and the Canadian Air Force.  If you can’t attend the show, the Squadron maintains several videos of their aerobatic displays, which can be accessed here: http://www.snowbirds.dnd.ca/v2/index-eng.asp