I recently came across a copy of an old school book, “Picture Map Geography of Canada and Alaska” by Vernon Quinn, that includes charming woodcut picture maps by Bruno da Osimo, a then noted Italian illustrator, for each of the Canadian provinces (other than Nunavut, which was then part of the Northwest Territories).  Originally published in 1944 and updated in 1954, it has a light but well-written chapter devoted to individual provinces.  Each map features animals, plants, activities and industries peculiar to the province depicted.  In addition to the maps (scanned in above and below), the book is adorned throughout with other delightful illustrations by da Osima (some of which I’ll compile in a future post).

• Old Maps and Their Hidden Stories

I’m a sucker for images of the lonely, serene beauty of the far northern wilderness — they readily draw me in and don’t easily let me go.  So, I was delighted recently to happen upon the work of Manu Keggenhoff, an Atlin, B.C.-based photographer whose exquisitely keen sense of composition wonderfully showcases the Yukon, British Columbia and other northern regions.  She also has a lot going on that’s worth checking out.  Among other things, her work is on display through the end of this month at the “Mood of the Land” exhibit at the Yukon Arts Centre; she’s just published a sumptuous photo book, Northern Exposure, about the Atlin, B.C. area; she’s working on a new series of photographs called “Art and Soul” that looks intriguing; and she does graphic design for Yukon, North of Ordinary magazine.

See Keggenhoff’s website for more of her outstanding photography. 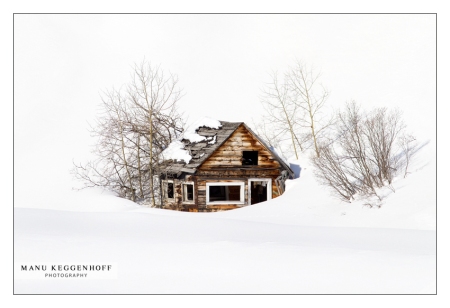 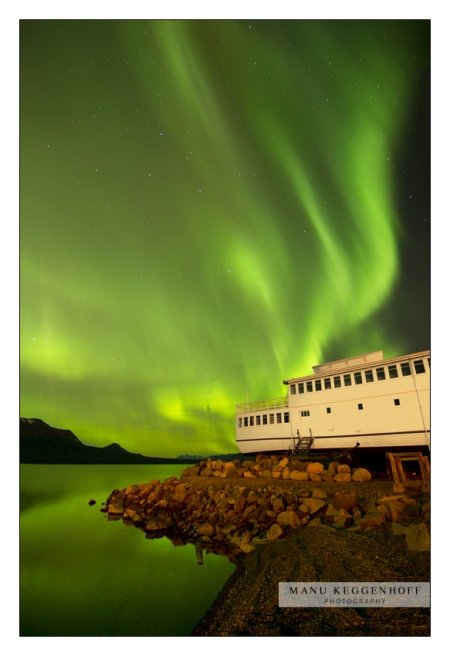 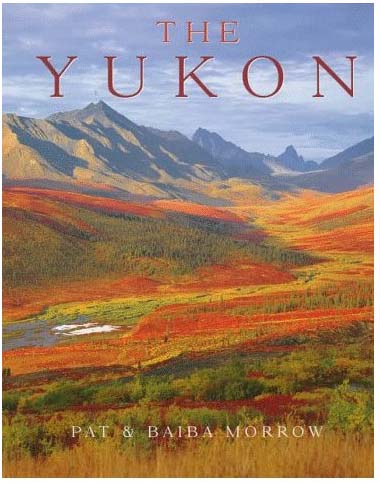 A few weeks ago I finished a couple of well executed photography books that convey the fantastic grandeur of the Yukon.  Fritz Mueller’s Yukon: A Wilder Place, with text by Teresa Earle, capture’s the natural side of this stunning and vast wilderness while Pat and Baiba Morrow’s The Yukon focuses more on the human side of this remote territory.  Together the books provide a virtual trip across a magical land where very few people live or dare to venture, its mysteries thus tucked safely away for the hardy few.  As Mueller and Earle note, “In a world where nature is becoming more cultivated, more compromised, and more rare, the Yukon is a wilder place.”

More photographs and information on these books can be found at the sites for Fritz Mueller and Pat & Baiba Morrow. 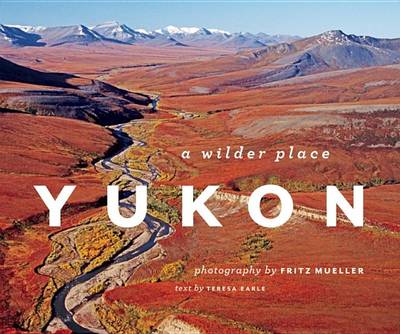 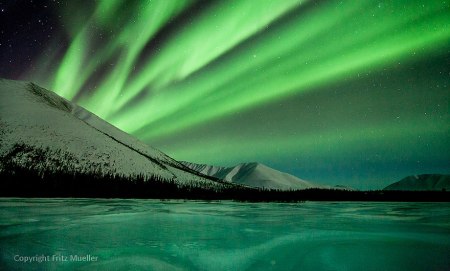 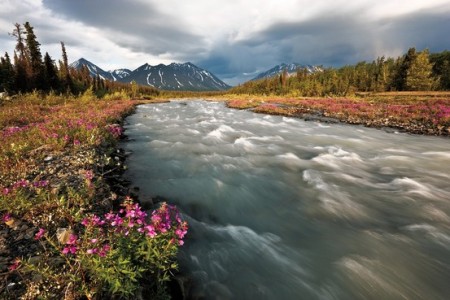 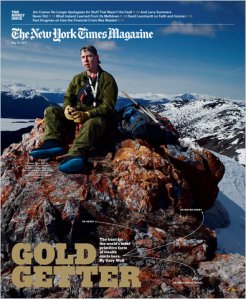 The New York Times Magazine ran a fascinating article today about Yukon Territory residents Shawn Ryan and Cathy Wood, who are among those leading the charge for what is turning into another Canadian gold rush.  The soaring prices of gold have much to do with the heightened attention to  prospecting for this precious metal in that area of the North.  However, the entrepreneurial spirit with which Ryan and Wood have pursued their ventures may be as much of a contributing factor.  While the article’s author, Gary Wolf, who is also a contributing editor for Wired magazine, focuses most of his attention on their ups and downs at prospecting, I think the innovative resourcefulness of this couple is best summed up by the following excerpt:

“It is tough to be penniless in Dawson in the winter. Wood cleaned some houses and served as court bailiff when the judge came to town, but in February 1993, they were down to their last $5. At the employment center, Wood saw a notice for a job removing the snow from the roof of Diamond Tooth Gerties, the local casino, which opened for a brief winter season coinciding with a dog-sled race. The job was usually taken on by a team of local residents for thousands of dollars. Wood bid 500. Townspeople came out to see how the low bidders were going to do it. She and Ryan cleared the edges of the roof with shovels, then Ryan climbed to the top and jumped up and down like a monkey. Gravity did the rest. The expressions of surprise on the faces of the onlookers made Wood laugh. People in Dawson had to acknowledge that for people at the bottom of the status hierarchy — and there aren’t many rungs beneath mushroom picker — they had some unmistakable gifts.”

I’m a glutton for magazines and, undoubtedly, have way more subscriptions than warranted for any normal person.   Although online media continue to nip at the heels of print media, magazines continue to hold their own, especially where the publication is able to use online multi-media features to enhance its offline offerings.   Just as with the U.S., Canada has a wealth of solid mainstream publications, but the ones that most attract my attention are the regional and niche publications.  With that in mind, I thought it might be interesting to take a look periodically at some of the country’s noteworthy smaller magazines, and to do that by starting way up north.

Amazingly, the far north is graced with at least two truly terrific general circulation regional magazines, Up Here and Yukon, North of  of Ordinary.   The more broad ranging in scope and literary of the two appears to be the monthly Up Here, which principally focuses on life in the Yukon, the Northwest Territories and Nunavut, although it occasionally touches upon the far northern regions of Canada’s other mainland provinces.   The magazine’s layout conveys a playful, slightly hip aesthetic and its editorial content provides enough variety to satisfy even picky readers.  The latest issue I have (September 2010) features stories on Inuit who have moved south to Ottawa and Toronto, the failed effort in the 1960s and 1970s to develop a modern-day Shangri-La in the far north, a desperate Nunavut survival tale from almost a century ago, and, on a lighter note, the winners of the annual “Write Like Robert Service Poetry Contest.”  From an online perspective, Up Here‘s website makes available selected content from past issues, including entertaining multi-media features.  Not surprisingly, others have also taken note of this nifty little publication with lots of personality — so much so that Up Here received the prestigious 2010 Magazine of the Year Award from the National Magazine Awards Foundation.

Yukon, North of Ordinary stakes out a narrower geographic niche, emphasizing happenings in the Yukon.  The magazine devotes more attention to business matters in its editorial voice.  However, the quality of its feature writing is quite good.   The Fall 2010 issue profiles spooky haunts in Dawson City, reports on a cultural festival of the local Tr’ondek Hwech’in people, and explores how far flung Yukon families use technology to stay connected across wide distances.  The publication also serves as the official inflight magazine of Whitehorse-based Air North, so several pages cover matters of interest with that airline.  While Yukon‘s website is not as robust as that of Up Here, Yukon‘s site  archive provides better overall access to past issues.  Both these magazines  have a great deal that is useful and entertaining to offer their respective readerships and they each demonstrate why print media continues to retain our interest notwithstanding the pull of the web.

Several weeks ago my wife and I took a weekend trip to Asheville, NC, a small mountain city full of delightful shops, galleries and eateries.  Whenever I travel somewhere I am usually alert for a handful of things that are almost always on my personal radar, among them things with a connection to Canada.  So, as I was out on an early morning jog (great time for thinking, by the way) through the compact downtown area, I wondered what bits of Canadiana might surface on this trip.  Lo and behold, within the next few minutes a large painting of an exotic mountain scene caught my eye in the large display window of the Blue Spiral 1 Gallery.   I paused for a minute to consider further the bright image and at that point realized the painting was part of gallery’s then featured exhibition, called “The Golden Circle”, of works by North Carolina artist Robert Johnson documenting his travels through Southeast Alaska and the Yukon Territory.

Johnson compiled notes and sketches in his travel journals — pages from which were on display in the gallery — of the local fauna and flora in much the manner that a 19th-century amateur naturalist would have done.  From these he then prepared vivid acrylic and oil paintings of many of the notable sites he encountered on his journey through this remote territory in Canada’s far northwest.  His style immediately brought to mind the somewhat whimsical and primitive style of French Post-Impressionist artist Henri Rousseau.