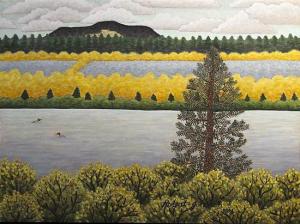 Several weeks ago my wife and I took a weekend trip to Asheville, NC, a small mountain city full of delightful shops, galleries and eateries.  Whenever I travel somewhere I am usually alert for a handful of things that are almost always on my personal radar, among them things with a connection to Canada.  So, as I was out on an early morning jog (great time for thinking, by the way) through the compact downtown area, I wondered what bits of Canadiana might surface on this trip.  Lo and behold, within the next few minutes a large painting of an exotic mountain scene caught my eye in the large display window of the Blue Spiral 1 Gallery.   I paused for a minute to consider further the bright image and at that point realized the painting was part of gallery’s then featured exhibition, called “The Golden Circle”, of works by North Carolina artist Robert Johnson documenting his travels through Southeast Alaska and the Yukon Territory.

Johnson compiled notes and sketches in his travel journals — pages from which were on display in the gallery — of the local fauna and flora in much the manner that a 19th-century amateur naturalist would have done.  From these he then prepared vivid acrylic and oil paintings of many of the notable sites he encountered on his journey through this remote territory in Canada’s far northwest.  His style immediately brought to mind the somewhat whimsical and primitive style of French Post-Impressionist artist Henri Rousseau. 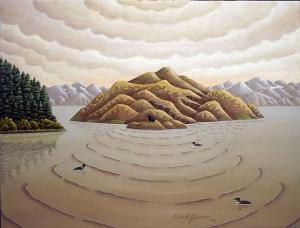 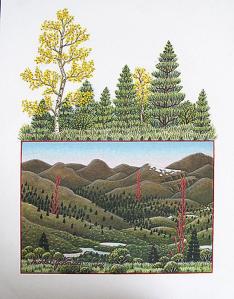