Today marks the fifth annual running in Newfoundland of the Great Fogo Island Punt Race, a 10-mile endurance race that requires its challengers to row punts (essentially, small row boats) across five miles of open ocean between Fogo Island and Change Islands and back.  The official event website is here, which includes a couple of fascinating videos, including “Postcard From Fogo Island”, a gorgeous short video about the race which can also be found here on the website of the Shorefast Foundation.  Aside from being great fun, the annual race celebrates the boating heritage of Newfoundland and its reliance on the durable punt, a craft that the people throughout the province have relied upon for over 300 years. 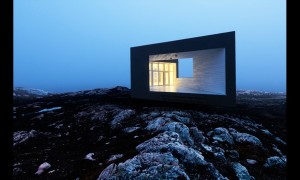 The Long Studio on Fogo Island

I’ve commented on Fogo Island previously in a post on the National Film Board of Canada’s 1967 documentary “The Children of Fogo Island.”  In addition to its achingly beautiful scenery, this rugged island paradise in Atlantic Canada has a lot going for it, not the least of which is the resilient spirit of its people and their strong sense of community.   Fogo Island’s Shorefast Foundation has done a remarkable job in just a few short years in promoting both deliberate economic development and a phenomenally vibrant arts community.  Providing a good examplef this, is the above photo is of the Long Studio, one of three recently constructed and strikingly innovatively designed arts studios on the island as part of a series of broader arts initiatives fostered by the Fogo Island Arts Corporation and the Shorefast Foundation.