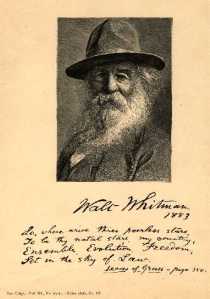 A couple of weeks ago, I had occasion to discuss Walt Whitman’s wonderfully contemplative poem “Song of Myself” with my youngest son.  Prompted by our talk, I started skimming my compact volume of Whitman’s collected poetry and prose works, which I had not paid any attention to in quite a while, and stumbled upon his Specimen Days, a collection of his reflections on his life and travels.   Besides being an innovative writer, Whitman was something of an adventurer in his day, so it was not surprising to learn that some of these reminisces included observations on Canada, which his biography indicates he traveled to in the summer and early fall of 1880, just about a dozen years after the formation of the Canadian Confederation.  I’ve recounted below some of Whitman’s comments from Specimen Days, in each of which he marvels at the amazing beauty and warm people encountered on his journey.

From “The St. Lawrence Line”:

“. . . [H]ere I am writing this nearly a thousand miles north of my Philadelphia starting-point (by way of Montreal and Quebec) in the midst of regions that go to a further extreme of grimness, wildness of beauty, and a sort of still and pagan sacredness, while yet Christian, inhabitable, and partially fertile, than perhaps any other on earth.”

From “The Inhabitants — Good Living”:

“Grim and rocky and black-water’d as the demesne hereabout, however; you must not think genial humanity, and comfort, and good-living are not to be met.  Before I began this memorandum I made a first-rate  breakfast of sea-trout, finishing off with wild raspberries.  I find smiles and courtesy everywhere . . . .  In general the inhabitants of this rugged country (Charlevoix, Chicoutimi and Tadousac counties, and lake St. John region) a simple, hardy population, lumbering, trapping furs, boating, fishing, berry-picking and a little farming.   I was watching a group of young boatmen eating their early dinner — nothing but an immense loaf of bread, had apparently been the size of a bushel measure, from which they cut chunks with a jackknife.  Must be a tremendous winter country this, when the solid frost and ice fully set in.”

From “Capes Eternity and Trinity”:

“But the great, haughty capes, silent capes themselves: I doubt if any crack points, or hills, or historic places of note, or anything of the kind elsewhere in the world, outvies these objects . . . .  Then they are as distinct in form as a perfect physical man or a perfect physical woman.   Cape Eternity is bare rising, as just said, sheer out of the water, rugged and grim (yet with an indescribable beauty) nearly two thousand feet high. Trinity rock, even a little higher, also rising flush top-rounded like a great head with close-cut verdure of hair.  . . . They have stirr’d me more profoundly than anything of the kind I have yet seen.  If Europe or Asia had them, we should certainly hear of them in all sorts of sent-back poems, rhapsodies, &c., a dozen times a year through our papers and magazines.”