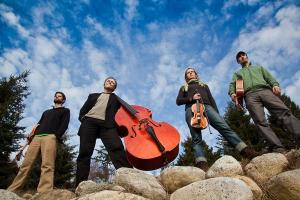 A couple of months ago I stumbled onto the web site for Bearwood Music, a small music label in British Columbia.  While there are several artists recording with Bearwood that interest me, one of the standouts is the band The Rakish Angles, who are from Gibsons, British Columbia.  The amazing quartet performs a wonderful mixture of instrumental bluegrass and jazz, that has both traditional elements and some experimental aspects (for instance, a couple of their pieces meld bluegrass with flamenco — a combination I’ve not heard before).  Although they were justly among the nominees for “Instrumental Group of the Year” in 2009 at the Canadian Folk Music Awards, I sense that these solid musicians don’t yet get the exposure their considerable talents deserve.

The song “Dan and Misha’s Wedding”, from their debut CD “The Rakish Angles”, is particularly beautiful as both a hopeful piece and as a contemplative elegy containing musical threads that, at least to me, are readily connected to  Scottish and Irish traditional pieces.  Because of this, I’m sure that the graceful notes of the violin in this song would have been familiar to many early pioneers in Canada from the British Isles.  It’s also reminiscent of any number of instrumental folk tunes still common today in the mountain regions of the southern U.S., which was also populated early on by immigrants from the same region and which has its own rich bluegrass heritage.   The song, which I’ve had on one of my recent iTunes playlist and which I’ve listened to repeatedly this past week, can be listened to in full on the band’s MySpace page (link below) or sampled and purchased on iTunes.  Give them a fair listen and I’m sure you’ll find some other truly good things  by these worthy performers.

Link to The Rakish Angles on MySpace:  http://www.myspace.com/therakishangles