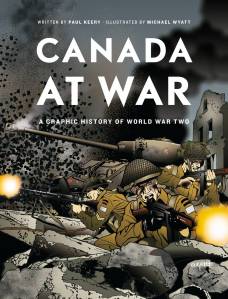 I’ve long been a fan of graphic novels as both an art form and literary form.  Over the past decade, it seems that graphic novels as a genre have come into their own and are no longer dismissively regarded as just comics for grownups.  I like them as much for the elements of creativity that a well done volume can bring to telling a story as well as for their being excellent reflections of the adage that a picture is worth a thousand words.  So a couple of weeks ago my curiosity sent me in search of graphic novels either about Canada or by Canadian authors.  Unsurprisingly, given the many other contributions of Canadians to the culture of popular entertainment, there appear to be a fair number of such graphic novels.  In particular, Canada boasts the quite prolific graphic artists Seth (a/k/a Gregory Gallant), who has released several acclaimed graphic novels in recent years, including It’s A Good Life If You Don’t Weaken (1996), George Sprott (2009) and The Great Northern Brotherhood of Canadian Cartoonists (2011), and Scott Chantler, whose works include Northwest Passage (2005-2006) and Two Generals (2011).

I’m still exploring the Canadian graphic novel, so for now I’ll share a few thoughts on Canada At War:  A Graphic History of World War Two, written by Paul Keery and illustrated by Michael Wyatt, which was published in 2012 by Douglas & McIntyre publishers and which I just finished.  This non-fiction graphic novel provides quite an eye opener about how WWII greatly contributed to the maturing of Canada’s armed forces and the national identity.  It also helped me to understand better the circumstances that gave rise to the disastrous battle at Dieppe in 1942, one of the more tragic episodes involving the Canadian military and which I had heard mention of before but had not fully appreciated.  Among other things, Keery provides an overview of the role of each branch of Canada’s armed forces and major battles or efforts in the Atlantic, the Pacific, in Europe, in Asia and at home. There are numerous vignettes throughout the book highlighting daring acts of bravery and heroism as well as facets of the country’s war effort that remain well below the radar screen but which were, nevertheless, vitally important to the eventual success of the Allied forces.  Keery’s graceful writing and Wyatt’s riveting illustrations are well paired here.  Highly recommended reading.

Update:  Since posting the above, I discovered that Keery and Wyatt have a site devoted to Canada At War, which makes for great additional reading, especially their thoughts on the creative process and their preference in referring to the book as a graphic history as opposed to a graphic novel.  Their site is here and contains additional excerpts.