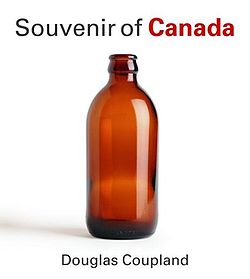 I just finished reading Douglas Coupland’s fascinating Souvenir of Canada (which, incidentally, is published by Douglas & McIntyre), a series of interrelated essays and photographs about the nature of Canadian identity.  Coupland uses an alphabetical arrangement of iconographic topics that most Canadian’s will readily understand or relate to —  such as “Distance”, “Maple Syrup”, “The Group of Seven”, “Hockey”, “Small Towns” and “The Trans-Canada Highway”, among many others — and his intelligent, at times highly personalized and humorous, commentary on these subjects both celebrates and challenges many of his country’s traditions.  Coupland followed up this 2002 book with a second volume and his reflections were later made into a film in 2006 by Robin Neinstein.  The initial set of essays compels me to track down these follow-up efforts.  Although Coupland targeted this work at his fellow countrymen, his frequent comparisons between Canada and the United States and the at times ambivalent cross-pollination between the two countries, allows the book to serve as a very accessible primer for American readers on Canadian culture.

Coupland’s ruminations throughout this book are worth pondering further.  As but on example, here he is commenting on the concept of distance as it relates to Canada:

“You can never overstate how large a country Canada is.  Everything is far away from everything else; nothing is close to anything.  And a sizable chunk of the Canadian identity is defined both by how we pretend this isn’t the case, and how we can be so shockingly cavalier about plane hops like Vancouver to Winnipeg or Montreal to Halifax. . . . Canadians are the same as Americans about this — Texans will drive two hours to go out for dinner.  But whereas the continental U.S. has cities plunked about its forty-eight states with quite equal spacing, Canada (at least the inhabited part) is a skinny Chile-like entity that stretches across the continent.  To the north, for millions of square kilometres, lies nothingness, and this vast space looms large in the Canadian mind.  In our national anthem, it’s called the True North strong and free.”

About Canada’s 135th birthday in 2002, the year Souvenir of Canada was published, Coupland strikes an optimistic note about the country’s future:

“. . . Canada is a staggeringly young country, and we really ought to be easier on ourselves than we are.  We beat ourselves up trying to define ourselves when, comparatively, we’ve generated more myth and identity in our short lifespan than many countries ever did before their 135th birthdays.  There’s only so much national mythology that can be created in 135 years.  Relax.

“An added bonus of being young is that you’re not, well old.  So the future belongs to you — you can still make your country what you want it to be, and you can protect it from what you don’t want it to be.  Most countries have permanently locked into their myths and identities and their time for experimenting is over.”