While in Toronto recently I stayed at a hotel across from the Royal Ontario Museum.  Although I did not have sufficient time to tour the Museum, I briefly stopped by its gift shop.  Browsing through the art books on display I came across an amazing book on the Group of Seven that I had not previously seen and which I had to have.

Once back in Atlanta as I leisurely browsed through the simply named volume, The Group of Seven and Tom Thomson, by David Silcox (Firefly Books 2001), I was impressed anew at this amazing collaboration of early twentieth-century artists who helped define a distinctively Canadian style of painting.  (See previous post on OCanadaBlog here.)  It also gave me a greater appreciation in particular for Tom Thomson, but for whose untimely death in 1917, the collective might well have been called the Group of Eight.   As one of the other members, Lawren Harris, noted in a narrative of the Group, “although the name of the group did not originate until after his death, Tom Thomson was, nevertheless, as vital to the movement, as much a part of its formation and development, as any other member.” 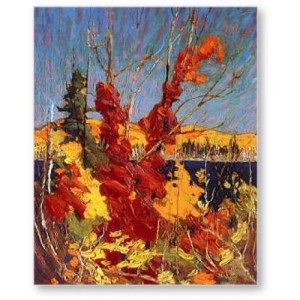 Silcox’s beautifully compiled book is organized into thematic sections, initially around some broad categories, such as “Icons: Images of Canada,” “The First World War,” and “Cities, Towns and Villages,” and then by geographic regions, including “The East Coast,” “The St. Lawrence River and Quebec,” “Algonquin Park and Georgian Bay,” and “The Prairies, Rockies and West Coast,” among others.   This approach enables a wonderful comparison of each artist’s perspective on the same subjects and geography.  Preceding each section is  a brief narrative by the author that provides historical and cultural context that enriches the understanding of the individual Group members and their works.

Tom Thomson, In the Northland