Distinctive industrial design reveals itself in many ways and, when done well, can be a genuine pleasure to take in.   While the specialness of such design is often difficult to see in our contemporary surroundings, its otherwise subtle impact jumps out when looking back at vintage images. A case in point: the humble municipal bus, operated in Toronto, Montreal, Vancouver, Calgary and other cities across Canada.  Over this period theses buses began to display a very mod sensibility as they evolved from the severe boxiness of earlier 1930s and 1940s versions to later, during the 1950s through the 1970s, being adorned with more rounded contours, sleek curves and very stylized lines and chrome elements. 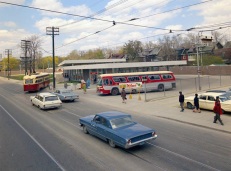